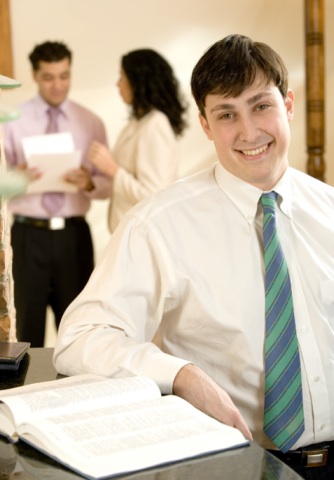 Paralegal jobs are expected to increase faster than those for attorneys in the coming years, making the profession a tempting alternative for people seeking law degrees and legal careers.

While the recession has had an impact, the paralegal career “is still a growth profession and is still expected to be one of the top growing professions for the future,” says Laura Barnard, director of the paralegal studies program at Lakeland Community College in Kirtland, Ohio, and chairman of the American Bar Association’s Standing Committee on Paralegals Approval Commission.

Smaller, leaner law firms also are holding their own, especially if they practice real estate or bankruptcy law.

“The other advantage for paralegals is that while law firms are laying off attorneys, they are still hiring paralegals because they can do much of the same work, but at a much lower cost.”

Thiessen says Duke’s six-year-old online paralegal program enrolls students from “all over the U.S. and abroad,” and includes a “great variety” of types of students, ranging from recent college graduates to stay-at-home moms, career-changers and retirees. The certificate costs about $7,000 and does not require a college degree for entry.

Paralegals, also called legal assistants, perform many of the same tasks as lawyers, except they can’t give legal advice or present cases in court. Most paralegals—71 percent—work in law firms, while the rest work for government or private corporations.

In the Recession, Paralegals Have Best Jobs

Average salaries for paralegals in 2008 were about $46,000, compared to $110,000 for attorneys. However, new law school graduates carry more debt—one study found 29 percent finish law school owing $120,000 or more—and face a tougher job market, at least in the next few years.

Demand for paralegals is expected to grow by 28 percent from 2008 to 2018, according to projections from the Bureau of Labor Statistics. By contrast, the market for attorneys is projected to grow by 18 percent.{{ad19}}

“For those just coming out of law school, it’s very, very challenging,” warns Allan Tanenbaum, an Atlanta lawyer who heads a commission set up by the American Bar Association to examine fall-out from the recession. “For those looking to go to law school: think a little bit before you act.”

Tanenbaum says law schools are producing more graduates than there are job openings. Many summer associates and interns at big law firms have had job offers rescinded or deferred, he says; one new law grad he knows is working at the Gap, unable to find employment in the legal profession.

Even if the economic downturn lingers, opportunities for paralegals should continue to be available. In addition to online certificate programs, such as the one Duke offers, those interested in the profession can find other distance learning law programs, including associate’s and master’s degree programs.