Grants are one of two types of free financial aid that does not have to be repaid. This and other similarities closely relate grants to scholarships. The two forms of financial aid have many things in common including a diversity of possible funders and awards to choose from. However, scholarships tend to exceed grants in number and availability. Despite having a more limited variety, grants are still the larger sources of student assistance between the two choices for free financial aid.

The largest and most popular undergraduate grant program is funded by the federal government, which is the number one supplier of student aid in the United States. Similar to other types of financial aid, student grants are need based awards that are allocated according to a standard formula that calculates the extent of an individual’s financial need. 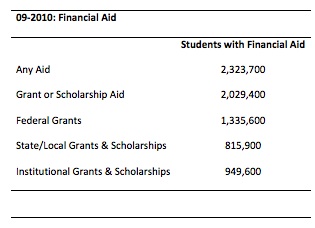 Most student grants therefore are formula grants. The other types of grants available are competitive or discretionary grants. Formula grants are distributed based on a set formula usually decided by Congress, while competitive grants are merit based awards distributed for exceeding a set standard of expectations. Both of these two types of grants can be awarded to either people of institutions. 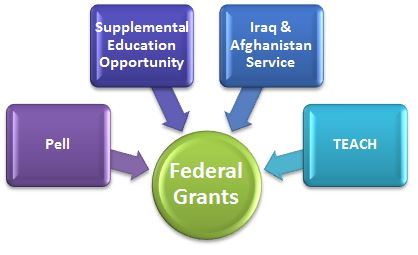 The largest provider of post secondary financial assistance, the federal government provides grants to both students and schools. All federal grants are funded by the Department of Federal Student Aid. A branch of the United States Department of Education, this department is the largest provider of student aid in the nation. For academic year 09-2010, the federal department sponsored more than one million dollars in grants to help students pay for college and career schools. With one exception, the four federal student grants are all based on a formula that determines financial need.

The Federal Pell Grant is the largest supplier of free scholarship aid. In 2010, this program provided more than one million dollars in grant aid, funding more than half of all undergraduates with free financial assistance. For 2011, the Pell grant distributed close to $36 billion dollars of aid to more than nine thousand recipients.

Specifically for undergraduate students with financial need, the maximum Pell award is $5,500 dollars. However, most students receive around $3,800 dollars. Based on financial need, the award amount depends on a student’s level of need and cost of their attendance. The Pell Grant is a first source of financial aid, which means that an award will not be reduced by additional assistance.