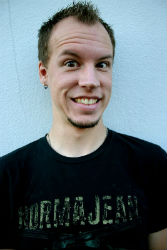 Alex Dontre loves his dual life: finance degree student by day, heavy metal drummer by night.
The 28-year-old musician never expected to go back to school. But online learning made it possible for him to pursue his career while going to school.
And with the help of a $1,000 online college scholarship from Get Educated, he’s on his way to earning his first degree.

Drummer Was Focused on Music, Not School

Ten years ago, Alex was ready to escape his high school’s negative environment. He was so eager to leave that he even went to summer school to earn enough credits for early graduation.
“I grew up in Phoenix and graduated from high school in 2002 as a junior,” he says. “Honestly, I just hated high school.”
His focus was—and still is—music. He began drumming at age 12 and quickly realized he wanted to pursue it as a career.
Alex answered a local newspaper ad for a heavy metal drummer and joined the band Psychostick “when I was 15—still had braces,” he says.
The band, which still has three original members, plays comedy heavy metal—or “humorcore” as the band dubs it. The band infuses comedy into their lyrics and shows.
They released their first album in 2003 and have since toured extensively, in addition to releasing more albums.
“We’ve toured the country a couple times over,” Alex says, adding they even went to Canada recently. “Once we started touring the states, we realized the country is smaller than you think.”
Although a majority of the band members are originally from Arizona, the band has since spread out and meet up for shows or recordings. Alex picked Columbus, Ohio as his homebase.

While Alex’s music career continued to grow, his personal life stalled. He was engaged to his girlfriend of five years, but constant touring had taken a toll on their relationship.
“I was never home, always traveling,” he says.
They called off the engagement in April 2011. Although the relationship ended amicably, Alex was still left unmoored by its ending.
“Following the breakup, I didn’t know what I wanted. My whole life was on the table,” he says.
He spent the next few months touring with the band and took advantage of the hours on the road to reevaluate his future.
“I realized I was doing exactly what I wanted to do,” he says. “I was in the right spot, but I wanted more. I had this growing interest in education and the finance world. I thought, ‘Screw it, I’m going to try to go to school.’”
Because he spends so much time traveling, he went with an online school. Columbus State Community College offered both in-state tuition rates and an excellent online program.
“By August 2011, I enrolled in Columbus State. It turned out that they had an excellent program [in finance],” he says.
He particularly likes that the degree is accredited by the Accreditation Council for Business Schools and Programs (ACBSP).

Life on the Road as a Musician and Online Student

Earning a degree on the road offers its own challenges, particularly at exam time.
Columbus State requires all online students have their tests proctored to prevent cheating and promote educational integrity.
“When I start a semester, I get the list of all my tests and when they’re due. I have to figure out what town I’m going to be in,” he says.
Then he must find colleges or education centers that can proctor the test for him. So far, he’s taken tests in Colorado, Florida, Missouri, Illinois, Montana, Texas and Wyoming.
Overall, he’s found that distance learning suits him quite well.
“For me, it fits with my lifestyle extremely well,” he says. “I really do enjoy doing it at your own pace. I’m a couple weeks ahead. On the road, we have eight- to 10-hour drives. What else can you do? Van sleep isn’t real sleep.”
Instead, he turns on his laptop and does homework.
“On the road, I get my noise-canceling earphones out and do my best to study while we’re traveling,” he says. “Verizon’s mi-fi (mobile wireless router) in the car—that makes the whole thing possible.”
This time around, he even likes school and is earning straight A’s.
“I really enjoy learning and school,” he says. “It’s a whole different environment from high school.”

Alex found the Get Educated scholarship through his membership in Phi Theta Kappa, Columbus State’s business honorary.
Get Educated offers the $1,000 scholarship for distance learning assistance twice a year. The program is based on both merit and need. The competitive online university grants are based on grade point average, a written essay and demonstrated financial need.
“[Winning the Get Educated scholarship] helps me out enormously,” he says. “My guitarist averaged it out—we probably make $3 an hour. It’s not a lot. Touring is really the only way to make decent money unless you’re selling several hundred thousand records.”
He acknowledges that music is a tough business, but is worth it.
“I’d rather not make a ton of money and enjoy my life,” he says.
But living on a musician’s salary has spurred him to apply for grants and scholarships to avoid as much debt as possible.
“I’ve had to rely on student loans,” he says. “I don’t even know if I’d try for a bachelor’s without getting scholarships. Scholarships are making it possible for me to go to school.”
He plans on using the Get Educated online college scholarship to help pay for part of his online associate’s in finance degree.

Future Plans Include a Career in Music and Finance

Once graduating in May 2014 with his associate’s degree, Alex would like to go for his online bachelor’s degree. He’s particularly interested in Strayer University’s program.
“They recently got accredited with business accreditation,” he says. “I could major in finance, minor in economics.”
After graduating, he hopes to combine music and finance for his career.
“I don’t want to stop my music because I enjoy it,” he says. “Lately I’ve been thinking about different ways to implement my newfound knowledge.”
Options include financial planning—perhaps geared to the music industry—or venture capitalism to “help the dreamers do what they do best.”
“I want to better myself, better the financial situation for my band, my friends,” he says.
But that doesn’t mean sacrificing the industry and careers they love. Instead, Alex hopes to use talents in heavy metal drumming and finance to carve out a fulfilling life for himself, his fans and his friends.