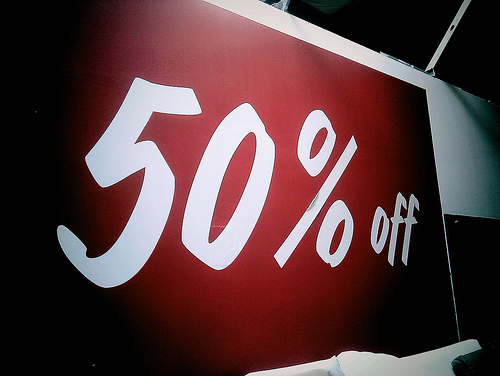 Why pay $70,000 for a business degree from the University of Phoenix Online when you can get the same degree delivered to your desktop for only $17,000 from the University of Wyoming online?   Non-profit colleges are offering online degrees in escalating numbers. And non-profit colleges cost a lot less than their for-profit peers. (Check out my data tables on affordable online degrees for real comparative cost information.)   Wall Street analysts have begun referring to the online education sector as “overweight.” Too many colleges, offering too much product. Worse still, most online colleges look identical to students.   Too much undifferentiated product heralds price competition.   Enter the age of the deeply discounted online degree.   Says Trace Urdan, Education analyst at Wells Fargo Securities:

“Price-based competition is a new reality of the online degree market and has been reluctantly but universally acknowledged by all of its publicly-traded operators. With recent substantial price concessions introduced by Strayer, ITT Education, and now Apollo Group, through its Western International University (West), we believe that we could witness some significant disruption in the market and what could be a significant slowing or even cessation in the for-profit sector’s market share losses to not-for-profit operators.

Things look bleak for pricey for-profit colleges. Enrollments have been spiraling downward since 2010. A nervous Wall Street is hoping that unprecedented price slashing and deep degree discounting will win back online students.   Says Urdan, the analyst:

“With little accompanying fanfare, Apollo Group has made good on its promise to investors not to cede the low-cost end of the online degree market to competitors. On May 1 the company dropped its pricing for Western International University (now called simply ‘West’) to $250 per credit hour from its previous $466. In addition, new students are charged only $200 each for their first two classes (effectively $67/credit hour), which seems an answer as well to the Kaplan Commitment, which permits students to drop classes within three weeks at no charge.   “We believe the new offering, backed by Apollo’s marketing sophistication and spending power, is likely to be highly disruptive in the market. More than simply dropping price, West aggressively encourages price comparisons with other low-priced providers in the market, calling out technology fees and book prices at other schools in contrast to its own all-inclusive pricing. It specifically names and declares itself cheaper than American Public University, Ashford University, and others.”

I doubt that price slashing will prove a panacea.   Here’s why.

The for-profit college sector has entered a new online era. I’m calling it the Age of the Blue Light Special à la my 1960s childhood shopping sprees in search of deep discounts on common household commodities with my Midwestern grandmother at K-Mart stores.   If you’re too young to know what a blue light special is, it was when the old K-Mart would suddenly slash prices on some commodity — say hair spray — and keep that one commodity on special for in-store shoppers for no more than a few minutes.   The store had a flashing blue light that they flipped on and rolled around as the day progressed. A savvy shopper could see the light spinning several aisles away.   Once the blue light was flipped on, it was first come, first serve. The rush to save a dollar on White Rain hair spray endangered many an innocent child’s life, mine humbly included because it was the ‘60s, there were seven women in my family, and we all used a lot of hair spray.   Deep discounts work to sell everyday commodities. But why anyone thinks deep discounts might work to sell online college degrees mystifies me.

As I wrote elsewhere in regards to the myth of the cheap online college, there has historically been nothing “cheap” about the real cost of online credentials offered by most for-profit college chains (American Public University Online is a consistently notable exception).   Get Educated tracks 374 online MBA programs, so, yes, an online MBA is no longer a rare commodity. We track 1,164 online business degrees; again, not a rare commodity.   We are in a new age of market competitiveness where colleges must, like car makers and sellers of other high debt consumer items, position their brands in a more competitive manner.   Convenience remains the #1 factor that drives consumers to online learning, but if you have 370+ online MBAs, and they are all equally convenient, then what?   Price competition becomes very real.   But there is another problem, and if this problem is not also addressed, for-profit online colleges have nowhere to go but deeper into a slump, forever branded as the “cheap” online education option.

The Double Whammy of Brand Death — Cost and Credibility

Real, old-fashioned universities — the kind with towers and Ivy plants older than the NASDAQ — have begun ringing school bells online. These lovable old universities are playing a digital soundtrack for the first time; and online students see these schools as immediately more credible than their Johnny-come-lately online-only peers.   It’s not just that for-profit online degrees tend to cost so much more. It’s also that they tend to lack credibility.   And credibility is a critical selling point in the education sector. The whole point of a degree is to gain external validation that you are a real, credible professional. What good is a credential of credibility if it comes from a source that lacks that brand dimension itself?   Way back in 2005, so many consumers were emailing and calling Get Educated to check on whether or not their chosen online college was real — I once logged 23 calls before my morning coffee — I started a free database called the Diploma Mill Police. The database contains factual data on the accreditation status of online colleges and lists “degree mills.”   There are, of course, hundreds of degree mills online, all duly accredited by fake agencies — and that was the problem I designed the Diploma Mill database to address. Or so I thought.   Two months into operation, I saw that nine of the top 10 schools people queried using the Diploma Mill Police database were properly accredited online colleges. Shockingly, all of the top 10 online colleges consumers suspected might be diploma mills were for-profit colleges. That’s what I call a credibility problem.   Lawsuits by disgruntled students and news of record low online bachelor degree graduation rates have not helped the reps of the largest for-profit online college systems.   A study in California on for-profit degrees vs. non-profit degrees by the Public Policy Institute of California (PPIC) concluded last month that “student debt loads are much higher, and employment prospects are weaker for students at private for-profit colleges than for most students who attend public four-year colleges or private non-profit ones.”   The Contra Costa Times reported that the majority of students at for-profit California schools often accrue a higher amount of debt than do students at other types of institutions. The Times notes that “First-year students at private, for-profit colleges in 2010 averaged loans of $9,189 compared to $5,289 at public four-year schools, according to the report.”   The recent PPIC study also highlights that students of for-profit schools earn about $2,000 less annually than non-profit or public college school students.   One of the PPIC study authors, Hans Johnson, speculated in the San Francisco Chronicle that “employers value [for-profit] degrees less than they do those from more traditional universities.”   High cost. Low credibility. The data is solid. It’s a double kiss of death that even the best Wall Street minds and their SEO marketing machines cannot overcome.   Yes, put online business degrees on sale. Roll out a row of blue lights. I am all about more affordable online degrees.   But if the issue of credibility is not also addressed, and in a serious and consistent way, consumers will continue to flee from for-profit colleges online. They will flock instead to traditional universities, which have just recently realized that mega demand exists for their established reputations online.   Low cost + high credibility. Traditional universities bring both these critical brand dimensions to the online degree marketplace.   How on earth is the for-profit sector going to compete with that?

Written by: Vicky Phillips was cited in 2009 by US News & World Report as “for 20 years the leading consumer advocate for online college students.” In 1989 she designed America’s first online counseling center for distance learners on AOL. In 1998 she authored the first print guide to online graduate degrees – Best Distance Learning Graduate Schools put out by the Princeton Review. In 2001 she authored Never Too Late to Learn the Adult Student’s Guide to College.