What’s faster, cheaper, and more affordable than a college degree? 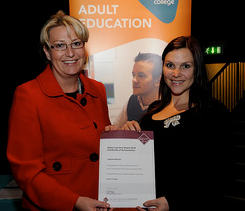 Online Certificates Offer College Credentials Without the Hefty Price
(Seevic College/flickr)
A new higher education report by the Georgetown University Center on Education and the Workforce suggests that online certificates — often dismissed by colleges themselves — may be the new super-food in the higher education chain.

If you crave a fatter wallet, let go old-fashioned dreams of a college degree — earn an online certificate, instead, suggests the Georgetown researchers in their new higher education report, Certificates: Gateway to Gainful Employment and College Degrees.

The Georgetown report concluded that certificates, whether earned online or on campus, often outperform two-year and four-year degrees in terms of cash return. The average worker with a certificate saw 20 percent fatter paychecks than peers with only high school diplomas.

Online certificates are better than degrees because they can be completed faster (often in under a year), are pegged to trendy high-paying careers, and place less debt stress on mature workers.

The certificate trend suggests more American workers may be opting to skip the long-haul of a college degree. Some are earning bankable career credentials in under a year, at a fraction of the cost of a degree.

All Certificates Not Equal

The Georgetown researchers cautioned that not all certificates return robust rewards in the marketplace. It matters what you study. Careers with high levels of specialization coupled with unmet demand boosted earnings the most. Get certified in IT, protective and police services, or selected applied business areas, and you’ll get a job that pays.

Don’t expect a food services certificate or a beauty school credential to be quite as bankable. In fact, the report found one reason women certificate holders make less is that they tend to major in subjects — such as cosmetology — that don’t rank high on a return on investment scale.

Men Get Bigger Payback with Certificates

“Certificates don’t work for everyone,” cautions Anthony P. Carnevale, the report’s lead author. “Certificates are the cutting edge for Hispanic educational and income gains; they provide big payoffs for men but not for women, especially African-American women.”

Report Says: Men who earn certificates rack up 27 percent more in wages than high school-educated men. Their female peers, by comparison, realize only a 16 percent increase in wages when compared to their high school educated peers

The report found that a surprising 34 percent of certificate seekers hold at least one college degree. A third of all certificates are earned by students over the age of 30, revealing another trend: the graying of the student body.

In today’s lifelong learning world, professionals have to re-set their brains once every few years. Career skills mastered as part of a liberal arts degree may be outdated by the time “Pomp and Circumstance” plays on the stadium loudspeaker.

Anyone who earned a teaching degree a decade ago mastered principles that assumed they’d stand and lecture. But now even elementary school teachers are being asked to assemble their own open source e-textbooks and teach 24-7 on YouTube.

Enter the post-degree certificate in teaching just about everything online.

In a tight job market, more workers are switching careers altogether, going where the jobs are. It’s not hard to find a 50-year-old professor enrolled in an online certificate in teaching with technology. The Georgetown authors found that certificates are most popular with lower-income students and with professionals who had lower educational levels or worked at lower skill levels.

The report found that:

Trends revealed in the Georgetown study suggest the market for online certificates may increase noticeably over the coming decade. Undergraduate entry level and mid-career IT, business, and healthcare subjects tied to professional certifications may be the fastest growth areas for conversion from classroom to online certificate delivery.

Vicky Phillips was cited in 2009 by US News & World Report as “for 20 years the leading consumer advocate for online college students.” In 1989 she designed America’s first online counseling center for distance learners on AOL. In 1998 she authored the first print guide to online graduate degrees – Best Distance Learning Graduate Schools put out by the Princeton Review. In 2001 she authored Never Too Late to Learn the Adult Student’s Guide to College.