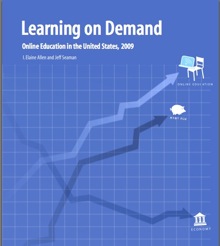 Learning on Demand: Online Education in the United States, 2009 is the seventh annual survey of online learning development produced by the Sloan Consortium. The study is based on responses from more than 2,500 colleges and universities.

Surprisingly, the Sloan report found teacher acceptance rates for distance education declined slightly, despite evidence showing online education holds its own when compared with traditional education. About 3 percent fewer faculty members in the new survey “accept the value and legitimacy of online education,” according to the report. In all, about 30 percent say that the advantages of e learning are valid and legitimate; 50 percent are neutral; and about 17 percent (up from 14 percent in 2007) say they do not agree.

The complete Sloan report on United States distance learning is available for free at the Sloan Consortium website.

How Popular and Prevalent is Distance College Education?