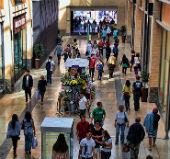 Missing from America’s malls: $34 billion.
That’s right: according to the National Retail Federation, $34 billion in merchandise walked out of America’s malls last year.
Some of it was stolen by kids and teens seeking goodies that lay outside their allowance limits.
But much of it was boosted by professional gangs of shoplifters who travel from city to city loading up the false linings of overcoats and skirts with high-profit portables like jewelry and cameras.
Make no mistake: shoplifting is big business.
Retail loss is booming. And so too are career opportunities for private security specialists armed with the kind of mental muscle that criminal justice degrees and certificate programs impart.

Mark R. Doyle, president of Jack L. Hayes International, a Florida loss prevention firm, says the number of shoplifters and dishonest employees caught stealing by U.S. retailers “continues to amaze us, and this is a much greater problem than many people realize. Retail theft drives higher prices for the consumer, hurts our economy and forces store and/or business closings.”
Doyle’s firm undertakes an annual retail theft survey. The numbers are eye-popping. According to Hayes International, one in every 28.2 employees was apprehended for retail theft from his or her employer in 2007.
Look carefully at your sales clerk the next time you purchase a digital camera. Does she have sticky fingers? Employee five-finger discounts are more common than you’d dare imagine. According to Hayes International, 82,648 dishonest retail employees were apprehended in 2007, up 17.57 percent from 2006.
82,648? That’s more than 38 times the entire prison population of Vermont.

One unhappy employee can rain financial havoc. According to Hayes International, the average dishonest employee lifts $808.09 worth of merchandise before apprehension.
Imagine 10 such employees running amok through sporting goods in a single month. You begin to see why retailers are investing record numbers in recruiting and training private security officers and store detectives.
Dishonest employees are not alone. Shoplifting, once a crime committed mostly by allowance-short teens and the occasional kleptomaniac, is now a lucrative branch of organized crime.
Indeed, hard economic times have driven criminal rings to take up organized theft inside large retail chains. One recent University of Florida study on retail crime found a dramatic increase in the average dollar loss per incident. In 2003, $265 was the average loss per theft incident. By 2005 that had grown to $854 per incident. These days the total rings in well over $1,000.
University of Florida criminologist Dr. Richard Hollinger, who has directed the National Retail Security Survey for more than 16 years, believes that organized retail theft (ORT) is the most likely cause of the dramatic per-incident increase in retail theft.
“ORT, in which criminals work in organized groups to steal merchandise from stores or warehouses, is a growing problem for retailers,” says Hollinger. “The average loss per ORT incident is now more than $46,000. These crime rings work in small organized groups and they can do a lot of damage in very little time.”
According to criminologists, most organized shoplifting rings have at least one “inside man.” It’s his or her job to spot or fabricate weaknesses in store security. Once a weakness is identified, thieves buzz in. Their job: strip away expensive merchandise as quickly as a storm of locusts.

Shoplifting and employee theft are big enough problems that many large retail chains now maintain their own internal police departments. Never think police who work in retail loss prevention, known by some as mall cops, are ill-trained or ill-equipped.
Many retail police departments are both better staffed and better equipped to detect and deter theft than your average city police department. Increasingly, retail giants rely on their own criminal justice teams to keep theft under control.
If you’ve ever dreamed of a career in the criminal justice field, there’s never been more demand. The private sector in particular is bracing for a hiring boom as hard economic times cause retail and corporate crime to escalate.
Want to work as a security officer, loss prevention expert, private detective or video crime surveillance officer? Don’t just apply at your local sheriff’s office. Think big. Think corporate. TJ Maxx and Wal-Mart employ more retail theft and loss specialists than all the local government agencies combined.
Private firms such as ADT Security, which sponsored the University of Florida retail crime survey used in this article, also train, employ and place private police and security forces.

Long gone are the days when being a private security officer required only physical muscle and a pair of shoes with thick gum soles. Today’s criminals employ intelligence to defeat technologically advanced theft deterrence systems.
Private police must develop equally powerful mental muscle.
One of the best general criminal justice bachelor’s major for becoming a loss specialist is criminology. However, to really succeed in this justice career field, you may need to beef up your knowledge base. Forensic psychology and cyber crime or computer forensics are two areas where demand is sky-rocketing and salary levels are equally high and rising.
“There is new technology out there for combating organized retail theft, and we are seeing more and more retailers asking for it,” says Rex Gillette, vice president of retail national accounts for ADT Security. “Retailers are especially interested in new intelligent camera systems that pick up unusual behaviors or patterns and can alert store employees to possible organized crime activities.”
According to Gillette, 40 percent of retail chains plan to increase their use of video recording and video monitoring over the Internet in an effort to thwart organized retail crime in the coming decade.
Related Resources


Lorna Collier has been a writer and editor for more than 20 years, with specialties in education, technology, business and health.