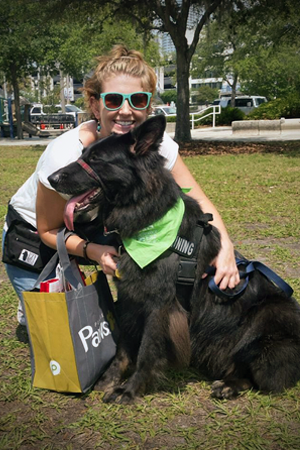 Samantha Schinder, a former member of the U.S. Air Force, is our latest $1,000 Get Educated online college scholarship winner. She is using the award money to pursue an online Doctorate in Public Safety Leadership, Homeland Security concentration with an emphasis in counterterrorism.

A current 4.0 student, Schinder is a powerhouse of talents, with an impressive LinkedIn resume. She speaks Italian, English, as well as Farsi, due to her background in Middle Eastern cultural analysis.

While a Senior Intelligence Analyst analyzing Iran for USCENTCOM (United States Central Command), Schinder began working on her doctorate in 2012.

The GetEducated scholarship will help towards financing her last colloquium (an experiential learning curricular consisting of tracks) towards an anticipated end-of-May completion, as well as her next steps: The comprehensive exam, and the year or two it takes to complete her dissertation.

“I am honored to receive this scholarship,” Schinder shared with us on the day the award funds were released to Capella. “The essay required was rather personal in nature, so the fact that it was selected is very validating.”

Since the Fall of 2010, GetEducated has given away over $20,000 in scholarships to applicants pursuing online education.

Samantha stood out from our latest crop of applicants, impressing us not only with rock-solid career in military intelligence and academic background, but also with how she handled life-changing curveballs.

As a Rhodes Scholar with a high-powered academic background and career in Middle Eastern cultural analysis, Schinder was primed for a life as a career military officer.

Or so it seemed.

Overseeing various intelligence-related projects and teams for the U.S. Air Force since 2010, she is a SME in missions related to the B-52H (a strategic bomber operated by the United States Air Force).

All that changed in 2012, when her clearance file was flagged due to an incident noting that she was assaulted while on active duty in 2010.

Those handling security clearances misinterpreted her file, resulting in Schinder losing part of her clearance. Setting off an unjust chain reaction, she was fired the same day from her job as a USCENTCOM contractor.

“I also lost the ability to work in my field due to no fault of my own,” explained Schinder. “No company would hire me because part of my clearance was in adjudication and I could not fix my clearance without being hired.”

As a result of physical and mental disabilities resulting from active duty, she now has a service dog named Whuffo (a term cheekily referring to someone who has never gone skydiving before) – an ironic namesake as Schinder has completed 330 dives herself.

Fittingly, Schinder’s current Ph.D. dissertation at Capella is focused on working canines in public safety. For decades, canines have played a critical role in protecting our country, whether their missions include sniffing out narcotics or firearms, or search and rescue, or tracking and trailing.

As such, their importance continues to grow: According to the Department of Homeland Security, the Explosive Detection Canine Team has grown nearly six-fold from 12 teams during its establishment in 1998.

“Everything I had so strenuously worked toward in my life up until that point seemed closed off from me,” her essay recalled the crossroads she found herself in after leaving active duty in 2012. 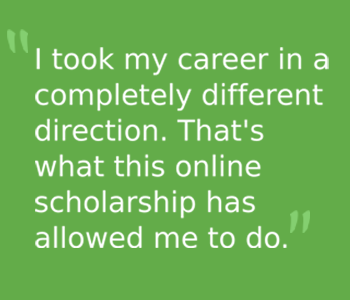 Statistics on military veterans are staggering: Approximately one out of two (53%) Post-9/11 Veterans will face a period of unemployment upon transitioning to the civilian workforce, according to a study from the 2015 Veteran Economic Opportunity Report.

Service-connected disabilities and other transition obstacles leave many veterans in a bind.

With a hard-earned career suddenly and inexplicably out of her grasp, Schinder pondered her next step while taking on a contract job as a dog trainer to keep the lights (and mortgage) on.

Then her father said something profound to her: sometimes in life, you have to back up and punt.

“That’s what this online scholarship has allowed me to do,” Schinder reflected on the football metaphor. “I took my career in a completely different direction.”

Deviating from the path of a career military officer, meant figuring out new day-to-day realities like paying for school.

“My strategy for financing my education is more of a prayer than a strategy,” she admitted. “I am paying for it out of my pocket, so (this) scholarship significantly eased that burden. I try to pay a little on them each month from my earnings from my business.”

While Capella University offers a 10 percent discount on graduate online degree tuition, this is the first time Samantha has had to fund her education out of pocket. Previously, she had full-ride scholarships or was military-funded.

The coursework for her final colloquium, incidentally, is not covered by federal student aid.

For the past two years, Schinder has been running a small boarding and dog training business, called Camp Sammy Dog Boarding and Training, out of her home in Tampa, FL.

The year prior to that, she did contract work as a Head dog trainer specializing in canine behavior, obedience, and remediation, as well as training for disability, service, and therapy dogs.

“Being an online scholar allows me the flexibility to train dogs and care for them concurrent with studying,” explained Schinder.

No stranger to the distance learning modality, she also holds a Master of Arts in Intelligence and Terrorism studies from American Military University.

The flexibility of the online curriculum allowed her pursue her focus of study (insurgency in Afghanistan) from 2010 to 2012, while simultaneously employed in intelligence analysis roles for the U.S. Air Force and leading tactical level analysis in counterterrorism measures.

Despite the unsavory circumstances leading to the career switch, it ultimately led her to her calling.

“I told a family friend that although I was good at intelligence analysis, there was something lacking in it for me,” Schinder recalled. “I told her I thought maybe I wanted to do something nurturing with my life.”

“It came full circle once I became a dog trainer.  I get to nurture and teach dogs all day long.  It truly is my calling.”

As life has taken a 180-degree turn, Schinder is still an expert in multi-tasking and time management – but this time in a slightly different way from her Master’s:

“Sometimes I type one-handed and hold a tug toy in the other,” she explained her approach to finding balance. “I use the school library to look up cool articles on dogs to share with my clients!”

After earning her doctorate, Schinder hopes to get into adjunct teaching at a college or university, or give lectures about canines in homeland security roles.

Whatever path she takes, one thing is certain: “Since dog training is my calling, I do not foresee me giving up my business even after I am Dr. Sammy instead of just Sammy.”