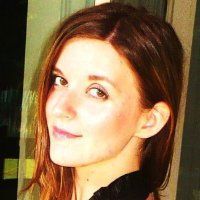 Emina Dedic’s degree isn’t only for her.
“It’s for my mother, my father; it’s for everyone in my family who wanted to go [to school] who never did, who never could, or who never had that opportunity,” she says.
She’s well aware of the sacrifices her parents made so she could have a chance at a college education. This knowledge has kept the 23-year-old steadily working toward a degree for the past five years, paying off her degree class by class.
Now, after winning a $1,000 scholarship from Get Educated, she can finally see a graduation date in sight.

Nearly 20 years ago, Emina and her family arrived on U.S. shores as Bosnian Muslim refugees. Religious persecution and brutal ethnic cleansing by Serbia drove them away from their native Bosnia.
While her immediate family all survived, some of her extended family never made it out.
“Half of my family is pretty much missing,” she says, explaining that Bosnian Muslims were particularly targeted in the genocide.
She credits the Red Cross for helping them make it safely to the northern Atlanta, Ga. area.

Life in America offered its own challenges—a language barrier, finding jobs, a new culture—but Emina’s parents were determined to provide for her, her brother and later, an American-born sister.
Although both parents worked long hours, Emina’s mother found time to teach them English with a Hooked on Phonics kit.
“She was learning while she was teaching us. That’s impacted me when it comes to my educational goals,” Emina says. “No matter where you are in life, you can rise above it.”
From early on, her parents stressed the importance of a good education, along with smart money management. For Emina, that meant staying debt-free while attending college.
To achieve this goal, she knew she’d have to work full-time and find an affordable college.

Kennesaw State University, a Georgia public school close to her U.S. hometown, offered a budget-friendly program. She could live at home and commute, saving even more money. After graduating high school in 2007, she enrolled and majored in English.
But earning a bachelor’s degree wasn’t as easy as she’d hoped. Closed-out classes delayed her graduation date, while a lack of funds forced her to take periodic time off from school.
The school also instituted new institutional fees that spiked the cost of a degree.
“In 2007, it was $2,000. Now, it’s upwards of $4,000, not including books,” Emina says.
“I’m paying off the degree as I go. I hate loans—I don’t want them,” she says. “You can get through it without debt…Colleges are like a business. I want to get the most bang for my buck.”
Eventually, Kennesaw State University’s rising costs forced Emina to withdraw and reconsider her options.

Although she was on the hunt for a new school, Emina also wanted to maximize her 100-plus hours of credits from Kennesaw.
A “general Google search in frustration” led to an online degree forum. Emina read stories from people who had earned degrees online by transferring to a degree completion program.
Intrigued, she read students’ posts about Charter Oak State College, a Connecticut-based online public school that offers a generous degree completion program. If she enrolled, all of her credits would transfer. She could even take classes at a different university and apply those credits to her Charter Oak degree.
It also offered her the chance to earn a degree and stay out of debt.

Emina enrolled at Charter Oak in August 2012 and was immediately impressed by their prompt responses to her many questions.
“They are wonderful. I love it,” she says.
In addition to transferring all of her Kennesaw credits, Charter Oak also allowed her to take DSST (formerly DANTES Subject Standardized Tests) and CLEP (College-Level Examination Program) exams for more credit.
This proved particularly useful since she also decided to change her major to psychology.

Helping Others With Online Psychology Degree

Emina credits her experience as a Bosnian refugee in impacting her choice of a new major.
“I want to help people with post-traumatic stress disorder,” she says, explaining that she saw her parents and friends struggle in dealing with the horrors they saw.
Earning an online psychology degree, along with graduate-level education and certification, will enable her to counsel and assist others who’ve experience similar traumas.
“It’s important to talk about it and deal with it,” she says.

Adjusting to online learning has been a challenge but is worth it, she says.
“It’s more challenging, because you have to teach yourself,” she says. “You’re really educating yourself. You have to be internally motivated. It’s very challenging but also liberating.”
The online degree completion program also freed up her work schedule.
In the past, she had to take off work every Tuesday and Thursday for school, but made up those hours on the weekend. Now she can work Monday through Friday at her desk job and still have plenty of time for her Charter Oak State College homework at night and on weekends.
“Teaching yourself is harder, but it’s easier to get things done,” she says. “It’s also a lot less driving!”

Emina’s new major in psychology, with its focus on helping people, reflects her future plans.
“I really want to serve others. That’s definitely what I want to do.”
She sees two graduate degrees in her future: “I do want a master’s in counseling. Probably a law degree as well.”
In addition to counseling PTSD victims, she also hopes to fight for more defined human rights laws in America.
She’s been using the Get Educated compare degree search to find an accredited online master’s degrees. “GetEducated.com is a great resource,” she says.

Graduation Date Moved Up Thanks to Online College Scholarship

Emina was surprised and thrilled to have won the Get Educated $1,000 online college scholarship.
Get Educated offers the $1,000 scholarship for distance learning assistance twice a year. The program is based on both merit and need. The competitive online university grants are based on grade point average, a written essay and demonstrated financial need.
Winning the Get Educated scholarship also means that Emina may be able to graduate earlier than she expected. She’s close to graduation, with just four classes left.
“If I could afford the four classes that I need, that means I can move up the graduation date,” she says. “The scholarship might make all the difference.”
She had saved up enough to take three classes, but needed money to pay for a capstone class—her final class at Charter Oak.
Thanks to the scholarship, now she can afford the capstone class, making it possible to move up her graduation date from December 2013 to August.
“This is just very humbling, very amazing,” she says.
Although Emina’s parents were once skeptical about online degrees, her success—like earning an associate’s degree at Charter Oak in December 2012—has quieted their fears and made them proud.
Her mother is currently in Bosnia with an ill family member, and a poor Internet connection has left Emina unable to communicate with her mother and tell her the good news.
“When she comes back [and hears about it], she’ll be so happy.”
“[My parents] told me, ‘Your education is the most important thing…All we want is a better life for you,’” she says.
It’s a message she’s taken to heart. After all, this degree isn’t just Emina’s. It’s her family’s, too.
Online College Scholarship Resources
Get Educated Online College Scholarship Program
Best Online Education & Distance Learning Scholarships
The Best Online College Grant and Free Money Financial Aid Programs