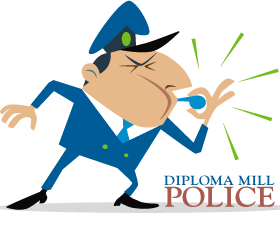 A network of diploma mills operating under the brand name of Belford suffered a financial blow after a federal court in Michigan mandated a $22.7 million payout to duped students who bought the group’s fake GED diplomas and college degrees. Belford High School and Belford University—both owned by Pakistani businessman Salem Kureshi—lost a federal class-action lawsuit for selling scam credentials to students. Now the Belford gorup of schools must make financial amends to their duped alumni in what authorities have ruled a degree mill scam involving several Internet domains, all operating under the Belford tagline.

On Aug. 31, 2012, U.S. District Judge Mark Goldsmith ordered Kureshi and his co-defendants to pay $22.7 million in a lawsuit settlement to Belford students in compensation for selling unaccredited diplomas and degrees. The Belford scam encompassed 30,500 plaintiffs living in the U.S. who purchased a fake diploma from Belford High School or Belford University from 2003 to 2009, at the start of the lawsuit.

The high lawsuit payout stems from charges in violation of the Racketeer Influenced and Corrupt Organizations Act (RICO). This act awards plaintiffs three times the actual damage amount. In this case, Belford sold degrees for $249 to 30,500 students. This amount of nearly $7.6 million was then tripled to $22.7 million in damages.

The Belford lawsuit originated with Flint, Mich. resident Carrie McCluskey, who received a fake GED diploma. She needed her GED to attend college and thought Belford High School was an affordable, genuine option. McCluskey took a short test, paid $249 and received her GED diploma a week later. It was only during her college application process that she received the unwelcome news that her GED was a fake.

Angered by Belford’s fraud, she contacted the Googasian Law Firm to initiate a class action lawsuit against Belford High School and a host of connected entities. The suit alleged that Belford was actually an unaccredited institution that sold high school, college and post-graduate degrees.

The Belford diploma mill lawsuit stretched on for nearly three years, but after numerous appeals by Kureshi, the court gave a judgment in favor of the plaintiffs.

Belford is reportedly not Kureshi’s only diploma mill. His name has been linked to the Organization for Global Learning Education, an entity that owns and controls Belford, as well as more than 20 other reputed diploma mills, such as Rochville University (the alma mater where the Get Educated mascot, Chester, a pug dog “earned” his life experience degree). During the Belford case, Kureshi testified that he owns and operates these companies out of his home in Pakistan.

Although Belford had been ordered to forfeit its domain names as a result for failing to pay sanctions, new Belford websites with slightly altered URLs have begun popping up. Belford’s owner reportedly started numerous related new diploma mills, such as Panworld University, during the three-years long lawsuit.

Experts estimate the diploma mill business rakes in a billion dollars each year. Diploma mills are often run overseas and sometimes fund terrorist activity. One recent chilling example is the case of Anders Behring Breivik, who killed 77 people in Norway. Breivik sold fake diplomas and credentials to more than 200 buyers a month to fund his killing spree.

Current estimates suggest that more than 200,000 fake diplomas are bought each year, with a majority of purchases made in the U.S.