We’ve all seen the spam. Makes no difference if you live in the urban United States or outer Australia. The “buy a degree” scam has gone global.

Diploma mills, which offer consumers a chance to buy online degrees (rather than earn them), are no longer a problem that is limited to the United States. As Judith Eaton, director of the Council on Higher Education Accreditation (CHEA), states, the world is suffering from a global epidemic of fake online degree providers:

Fake online colleges that lure consumers in with the promise they can buy a degree online, fast and for a few hundred dollars, are thriving. These diploma mills, often advertised as operating from headquarters in the U.S. while mailing credentials and diplomas from mail boxes overseas, represent a global problem that is being emboldened by several economic and social factors.

Buy a Degree Online Scams — Why They Won’t Go Away

There is a huge marketplace for fake college degrees worldwide, says Vicky Phillips, GetEducated.com founder and online education analyst. One reason? The global recession has made job-hunters around the world—not just in the United States—seek cheap ways to get a degree fast.

“If you need a university degree to get a job, and a real degree costs $49,000 while a fake diploma costs $499, some people are finding the cost savings alone a huge incentive to buy a degree,” says Phillips.

Since only about 30 percent of employers check credentials on applicant resumes, says Phillips, job-hunters may see little risk in listing online college degrees that are unaccredited by recognized accrediting agencies.

“Most employers who do check educational credentials simply call the college,” says Phillips. “The problem is all fake colleges provide a toll-free verification number for employers to call. Almost no one checks to make sure the college itself is genuine and properly accredited.”

These measures include greater regulation in the United States of the terms college and university and the establishment of cross-border agreements with other countries to discourage diploma mills.

Alan Contreras, administrator of Oregon’s Office of Degree Authorization, agrees that the number of bogus online “colleges” based outside the U.S. is a worsening problem.

Within the U.S., says Contreras, states are becoming more vigilant and adopting regulations to force online unaccredited schools and schools accredited by fake agencies out of business.

In the past 10 years, for example, the number of states that have made the use of an unaccredited degree illegal has jumped from two to 11.

In Oregon, says Contreras, people who attempt to pass off fake diplomas face up to one year in jail and a $1,000 fine.

“The domestic part of the problem is really the smaller half of it anymore,” says Contreras. “There’s not that many states where it’s easy to run a fake degree-granter—California and Hawaii are the only ones where it’s relatively easy.”

“Because of the Internet, it is very easy for entities located in other countries to sell degrees to residents of the U.S. or anywhere else.”

Even Your Dog Can Buy a Degree Online 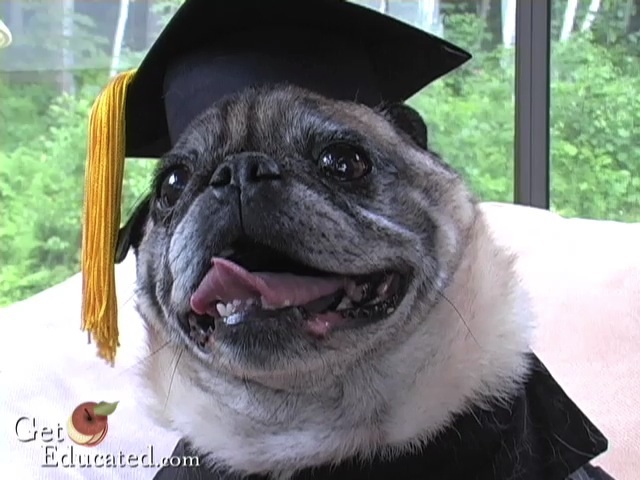 Chester paid $499 for his diploma and transcripts, which came stamped with a 3.19 GPA. The dog received, as a part of his graduation packet, a website URL where future employers could go to “verify” his attendance and graduation. The packet was express-mailed from a post office box in Dubai.

Within the U.S., says Contreras, the biggest diploma mill is Almeda University, which operates out of Florida and Puerto Rico and is “licensed” in the Caribbean.

Almeda, says Contreras, is “the number one bad apple in North America…There are a few others that are in that category: Canyon College, which operates out of Idaho and California, Breyer State, in California, and MUST University, that operates out of San Francisco.”

Employers often have a difficult time verifying which online schools are legit and which are diploma mills, especially if the schools are internationally based and not covered by U.S. accreditation organizations.

“The biggest problem is it’s next to impossible to screen out international suppliers, and there’s no regulatory mechanism I can foresee that can have any effect on them,” says Contreras.

The profit motive for online university scams makes it unlikely that they will stop any time soon: One degree mill can sell thousands of fakes a year, with little overhead (it’s not as if they employ faculty, after all).

St. Regis University, in Spokane, Wash., was estimated to have grossed about $3 million in five years. St. Regis operated from the United States while claiming approval from the African country of Liberia. Its founders are now serving prison time in Washington State.

How to Check Online School Accreditation

At present, there is no single source that accredits online colleges worldwide. Consumers in the United States seeking to get an online degree should verify that their online college is accredited by an agency recognized by the U.S. Department of Education or CHEA.

Get Educated operates the Diploma Mill Police, a database of the biggest online degree mills which consumers, human resource professionals and resume screeners can consult and add to at no charge. This free service includes a list of online schools that are most commonly cited as having fake or dubious accreditation. Articles are also provided to help consumers avoid online education scams.

Students considering online colleges that claim accreditation outside the United States should check UNESCO’s Portal of Higher Education. UNESCO, a trusted global source, lists internationally based colleges and that are properly recognized by their country of origin.

Related Resources
What is Online College or University Accreditation?
Diploma Mill or Real Online Degree? 10 Ways to Spot the Fake
What is a Diploma or Degree Mill?