Editor’s Note:  2011 saw the launch of America’s first gay online high school. In this blog entry, Kim Fountain, PhD., a cultural anthropologist and Executive Director of the RU12 Community Center in Vermont, reviews the history of education for LGBTQ youth and argues in favor of separate safe places for LGBTQ youth to learn. While some may question the need for separate but equal educational spaces for gays, Kim, who was present for the opening of Harvey Milk, the first gay-friendly public high school in NYC in 2003, argues in favor of the benefits of online education  – both online high school and college programs – for queers worldwide.

Harvey Milk and the Call for Gay High School Opportunities 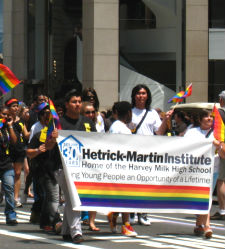 In 2003, I was part of a welcoming crowd that ushered in America’s first freshman class of lesbian, gay, bisexual, transgender, Queer, and questioning (LGBTQ) youth and their friends at the opening of the newly accredited Harvey Milk High School in New York City.   Many of these youth chose to attend a LGBTQ-affirming high school so that they could focus more mental energy on learning, and less on  dealing with homophobic and trans-phobic bullies.   But not everyone wished America’s first gay high school well.   On the opposite side of the street that day stood Fred Phelps and members of his Westboro Baptist Church protesting with signs that read, “God Hates Fags”  with pictures so vulgar no young person should see them.   The Harvey Milk High School still exists.   Last year a group of citizens launched a gay high school online in Los Angeles that caters exclusively to LGBTQ youth who may feel, for whatever reason, they have no local, safe space in which to nurture their academic careers.   Still, some question if LGBTQ youth really need a separate safe space to learn, whether that be in the form of an online high school or a unique residential campus. Wouldn’t integration be better?

Bullying does not end when a student leaves high school. In September 2010, Rutgers University student Dharun Ravi used a webcam to broadcast his roommate Tyler Clementi having sex with another man.   Ravi sent Twitter and text messages into the public media stream so that anyone could voyeuristically enter Clementi’s room, exposing Clementi in one of his most private and intimate moments.  This was not an instance of ‘bad behavior’ or ‘boys being boys’ as was sometimes argued. It was downright bullying and resulted in the death of Tyler Clementi, who jumped from the George Washington Bridge after finding out about his roommate’s actions.   The popularity of television shows such as Glee, and the public support of access to marriage for LGBT people by President Obama signals a clear and growing cultural acceptance of gay communities.   Still, bullying in schools keeps many LGBTQ students from engaging in and benefiting fully from the educational system their entire lives, from grade school through college.   This is why it is important that LGBTQ youth have as many options as possible for accessing education. Online high schools and colleges represent some of the most promising options for students who want an education but who are reluctant to visit a traditional campus due to ongoing concerns about harassment.   Young adults are “coming out” earlier in their lives and in greater numbers. High schools and colleges are too often still unfortunately not safe places for gays, let alone spaces in which they can thrive. 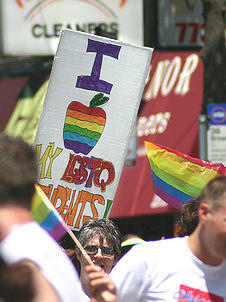 Online education offers LGBTQ youth the opportunity to learn in environments where they are free to be present in their bodies without worrying about peer and faculty reactions or how bias might interfere with their academic careers.   For transgender and gender nonconforming students, the idea of a safe and separate space is particularly relevant.   In a national study, State of Higher Education for Lesbian, Gay, Bisexual & Transgender People, Susan Rankin and her colleagues noted that LGB college students were more likely to experience harassment than their heterosexual counterparts. They are also more likely to be the target of derogatory remarks or to become victims of deliberate social exclusion.   Transgender and gender non-conforming students were even more likely to be adversely affected.   Many LGBTQ students also reported that they did not feel comfortable on campus or in classrooms. Compounding the effects of peer harassment, a significant number of students studied felt that universities did not support LGBTQ students and did not respond appropriately to violence against these students.

The LGBTQ Student: Integration vs. Segregation

When the Harvey Milk High School opened its doors, many felt that gay students should not need or be granted a separate high school; that instances of bullying – when and if they occurred – needed to be handled directly by the schools.   Opponents of students choosing less traditional settings, such as gay boarding schools or virtual high schools, argue that social systems and institutions will never change unless they are forced to do so. They also argue that integration is a key factor in this institutional change process.   What these arguments miss is that it will take years to rid our education systems of anti-LGBTQ language and physical violence.  Gay youth should not have to suffer while the system rights itself; they need access now to a range of choices that will encourage them to find a study space which they personally feel makes it easiest for them to learn.  Universities and colleges are aware of how to address homophobia and trans-phobia. Whether they actually do so should not be dependent on LGBTQ people first being harmed for gay issues to become “compelling enough” to inspire a change in policies.   With the growing popularity of virtual high schools and colleges, online learning is a viable option to help to overcome roadblocks to higher education for many LGBTQ students.  It can also alleviate the stress of having to negotiate homophobia and trans-phobia so that all students may thrive.   Each student will have to decide what works best in terms of their education. For those who want to learn but do not feel safe on a traditional campus, at least now the creation of an online gay high school and other online learning systems have expanded the viable options.

Editor’s Note: Do you know of any instances, research studies or case studies on the use of online education or learning systems to serve LGBTQ youth or the gay community at large? If so, shout it out to us in the forums!

About the Author: Kim Fountain, PhD, is the Executive Director of RU12? Community Center in Vermont. She is a cultural anthropologist who taught at Pace University and the University of New Hampshire. She worked for ten years at the New York City Gay and Lesbian Anti Violence Project where she participated in a broad range of youth-focused groups such as the NYC Homeless and Street Involved Youth Service Providers steering committee and presented numerous LGBTQ youth specific school based trainings.