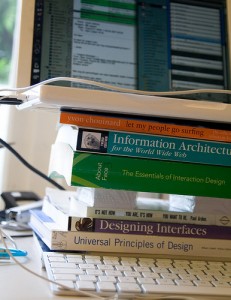 I wanted to thank Vicky Phillips for introducing Get Educated readers to my Degree of Freedom One-Year BA project, and thought it would be worth stopping by to describe what I’m doing in more detail (especially since much of it may be relevant to others interested in independent learning).   Degree of Freedom is a one-year degree experiment where I try to replicate a four-year liberal arts degree program by using only free online learning tools.

A bulk of the classes I’ll take are from the “Big Three” massive open online course (MOOC) providers: Coursera, edX and Udacity. I’m also enrolling in classes from less well-known MOOC vendors such as The Canvas Network and Udemy. My curriculum also includes classes not always associated with the MOOC phenomenon, including ones from iTunes U and library-based college lecture providers like Great Courses and Modern Scholar.   To replicate a genuine college experience, my course selection meets the same distribution and major requirements needed to graduate from a traditional bachelor of arts program. I’ve modeled these requirements on what I experienced at college in the 1980s, which include:

Oh, and speaking of majors, while my original college degree was in chemistry, the major I’ve chosen this time around is philosophy (go figure).   This choice was motivated by the fact that: (1) I’ve grown interested in philosophy over the last few years and wanted to pick a major that would hold my attention during the course of this project; and (2) I wanted to demonstrate that MOOCs and similar free learning resources could be used to concoct the equivalent of an online degree in the liberal arts (vs. the computer science courses that have been associated with MOOCs up until recently).

I’m using the Degree of Freedom blog (as well as an associated weekly newsletter) to document this entire experience, as well as to reflect on all aspects of online education. As I described to the journalist who wrote this profile of my project, I consider Degree of Freedom the equivalent of a 250-300 part news and analysis on all aspects of independent learning, which will allow me to reflect on what new teaching resources mean from the student perspective.   Part of this ongoing analysis is designed to determine where gaps still need to be filled that would allow these new learning methods to find their proper place among the growing range of educational options driven by Internet technology.   Academic rigor is still a major issue for these massive classes, which are easy to sign up for, but just as easy to cut corners on or drop entirely. So far, I have discovered that a self-motivated student who is dedicated to learning the material can get as much out of free learning as from a traditional brick-and-mortar class. But this requires the self-motivation to do all of the work, including the discipline to never move onto the next topic in a class unless you’re sure you’ve mastered the last one.   The original Get Educated blog post that mentioned Degree of Freedom talked about creeping fees (as well as other obstacles) associated with turning MOOCs into an actual institutional degree. In a recent series on getting credit for MOOCs, I highlighted the various options Vicky pointed out (including ACE accreditation and credit by exam).   I’m not entirely sure these options will be available to someone taking off-the-beaten-track courses (such as edX’s “Science of Cooking” or Coursera’s “Kierkegaard” class I’ve enrolled in for the fall). Nor am I sure if traditional routes for turning independent learning into college credit will be appropriate for all independent learners.   But I do know that this experiment in the democratization of education is offering students exposure to some of the finest learning experiences in the world at zero cost. And I can’t believe that this will not add up to something positive, even if it takes time to figure out how we can show off what we’ve accomplished to the world.

About the Author: Jonathan Haber is a writer/researcher who has worked in the field of educational technology. His current Degree of Freedom website chronicles his attempt to learn everything you would get from being enrolled in a four-year, liberal arts degree program in just 12 months using only free educational resources.