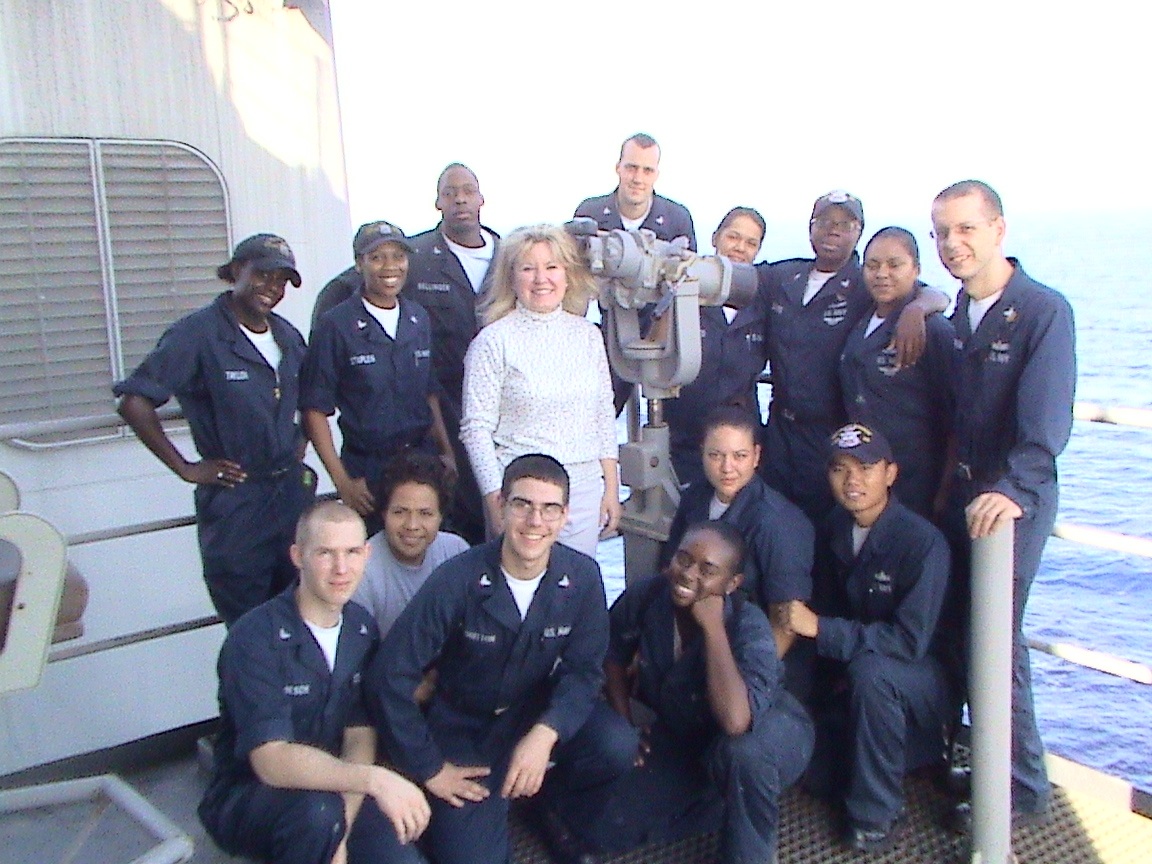 As the giant USS Nimitz plows through the Pacific Ocean, online college teacher Linda Beckham sits on board before her computer, hoping her Internet connection stays alive.

If not, she will lose contact with another set of military students she teaches—men and women stationed in Iraq, Kuwait and Afghanistan.

Beckham is both an online college instructor and a traveling teacher for Central Texas College Online. You will frequently find her on Navy ships like the Nimitz, teaching online associate degree classes in English and pre-algebra with groups of sailors—sailors who are sometimes so exhausted from their duties that they stand during class, for fear of falling asleep if they were to sit down.

When not teaching face-to-face, Beckham also teaches distance education classes, mostly to military students and spouses. Sometimes she runs the courses while at sea—meaning she has to deal with an unreliable and slow Internet connection that frequently has her staying up all night to get messages out to her students. Other times, she teaches her online classes from her home in Oklahoma.

“The phone will ring at 3 a.m. and my husband will say, ‘Baghdad calling!'” says Beckham, laughing.

Beckham doesn’t mind if her distance learning military students call her from Iraq with their technical or academic problems. “After lunch in Iraq is the middle of the night in Tulsa,” she explains. “That seems to be their time to call.”

While many instructors learn to teach online by earning a special degree or certificate, Beckman began by teaching in residential classrooms. She then evolved on the job to teach online through Texas military distance education program.

Beckham became an onboard military instructor after 9/11.

“My children were grown and I decided that was the thing I needed to do,” says the retired public schoolteacher. Her husband—a former Marine—supported her, even though it meant she periodically left on eight-week tours of duty that have taken her halfway around the world, from Singapore to Bahrain to the Mediterranean.

“Teaching online is the only way I can get into the middle of Iraq and Afghanistan to help our military personnel,” says Beckham. “The privilege to help is one that I can’t make myself give up!”

Whether her students are online or with her at sea, a constant challenge for her as a teacher is their military service, which comes first.

Military students can be “working along, doing fine—but then they are pulled out” for assignment, which could take them away from class for a week or more, she says. Or, iffy Internet connections, especially for online military students in the field, can create technical problems she must step in and resolve.

For example, students taking exams are only allowed to access the test site once. “If there’s a flicker in the electricity—which is frequent—it throws them offline,” says Beckham.

Overall, she says, the most important trait for a military instructor—whether online or live —is flexibility, including the willingness to change deadlines for students when military tasks require their absence.

Overall, she says, the most important trait for a military instructor—whether online or live—is flexibility, including the willingness to change deadlines for students when military tasks require their absence.
Beckham tries to engage her students by letting them pick what they wish to write about, which often reflects their unique concerns as people serving in the military, typically far from home.
“I get all kinds of narrative and descriptive essays that come from the environment they are in,” she says. “One of the best was a descriptive essay written by a Marine about what it was like to travel in a Bradley armored vehicle in the desert heat—what it was like in there, what they were thinking. It was absolutely brilliant.”
The biggest danger Beckham has faced in her military travels as an online college teacher is weather.

“I’ve been in extremely treacherous weather, where you couldn’t even sit in a chair without being thrown out,” she says. But she has never felt personally endangered, despite traveling all over the Middle East. The biggest hassle she’s faced was a passport snafu in Bahrain, which was quickly resolved.

“Working for the military is the best experience I’ve ever had,” says Beckham. “I am going to keep doing it as long as I can.”