The Classroom (A Cold Medium)

A virtual classroom is often considered an absent setting filled with empty faces, making the online classroom a cold medium. Such a medium creates an absence that dictates social isolation, the absence of a social community, a social context and a social presence. A student’s social presence is directly related to their social engagement and affection for an activity. For any student’s success, it needs to be constructed within the classroom, turning empty faces into recognizable identities.

Online students are often faced with being unaware of the faces around them, unaware of the social rules or of how to communicate. Virtual classrooms have the potential to completely disable a person’s sense of context, disabling them from feeling comfortable with their own words and responses. Once context disappears, social anxiousness and discomfort resume in its place.

Feelings of isolation and alienation are soon to follow from the frustrations created by barriers in communication and interpersonal connection. Initiated by physical and geographical separation, these barriers instigate feelings of aloneness from actual isolation.

Physical isolation inhibits an individual’s ability to acknowledge person-to-person awareness. This is the psychological distance controlled by verbal and nonverbal factors that dictate levels of immediacy and closeness. These are the things that communicate to students as human beings and not as students. They are universally accepted factors that are depended on to reveal whether a person is happy, sad, serious or frustrated, such as eye contact, dress, hand gestures, humor, and facial and personalizing expressions.

Helping people to become engaged with their situation, social presence is the opposite of social isolation. It is a measurement of interpersonal contact created through social interaction. Social presence in the classroom is established on a student’s identity, ability, and affection.

A student’s identity is based largely on participation and personal examples shared through it. Identity is easily translated into the virtual classroom through frequent discussion and the sharing of personal experiences during it. Combined, these approaches to virtual communication help students and the instructor recognize one another as a social identity.

To help reduce social distance, nonverbal factors such as humor and happiness can be replicated through the use of emoticons. There usage helps illuminate any contextual confusion, such as to whether a student may be angry or frustrated.

The most essential way to break through the geographical barrier and avoid online isolation is to learn effective virtual communication. Online communication is governed by a set of rules and standards known as Netiquette or Internet etiquette, which is founded on thoughtfulness, brevity and clarity.

Laws that govern social interaction, the first rule of Netiquette is to avoid being passive during discussions and participate with any relevant ideas or questions. Responses should reflect thoughtfulness in their construction. 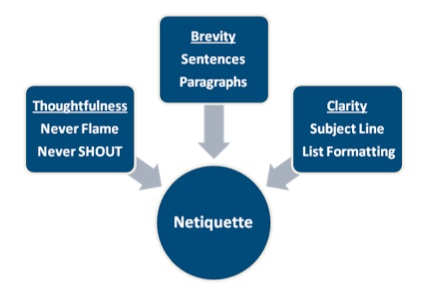 Antagonizing or criticizing comments are considered flaming and never constructive or acceptable. For this reason, students should be wary of using sarcasm, which can easily be mistaken for criticism without the proper nonverbal cues.

Shouting is not acceptable in the average conversation and it’s never acceptable in proper netiquette. The virtual translation of a raised voice, all capital letters are never used. Individuals should also be thanked in private for their responses to personal views.

Brevity should be applied to any form of online communication as a consideration. Both the eyes and mind suffer when made to stare at a screen too long. Responses should be limited to a single screen and more than two is considered unacceptable. The shortness of the response should trickle down into its very sentences and paragraphs. Running prose, using various clauses, is unacceptable Netiquette.

How responses are composed reflects Netiquette’s obsession with clarity. Subject lines of emails should be concise and reflective of their topic. Netiquette also loves to list things as separate and individual points. For this reason, the short paragraphs are separated by a black line instead of an indentation. In fact, individual points of ideas and arguments can be made even clearer by bulleting or numbering the paragraphs. Questions should also always be listed and never grouped together in a paragraph.