These are awards distributed by post-secondary institutions, such as colleges and universities, to recognize the completion of an academic program. Degrees are designed to provide a more well-rounded education than certificate programs, which focus on specific disciplines. They are meant to equip students with the educational foundations needed to pursue higher educational awards. 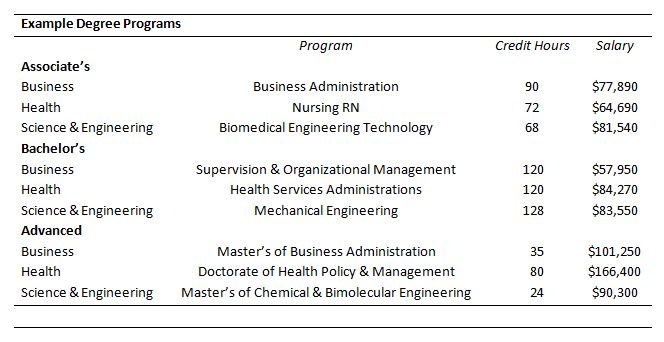 The major benefits of degree completion are very similar to those of certificate awards. They make students more employable or desirable for certain positions. In doing so, they open students up to higher possible earnings. Most students enter degree programs in the hopes of obtaining either a managerial or professional job career. Majority of these career positions are held by degree holding employees. In fact, over half of all managerial workers are equipped with a bachelor’s and almost 75 percent of professional positions require a bachelor’s or higher degree.

Just getting an associate’s degree usually adds around 200,000 dollars to person’s overall financial earnings. Completing a bachelor’s program is next step to both financial award and educational achievement. Earning 31 percent more than those with an associate’s degree and acting as an introduction to advanced education, bachelor degrees are the major stepping stones of academic benefits.

Almost 40 percent of bachelor’s recipients go on to complete higher education programs, adding at least 6,000 dollars a month to their earnings with a master’s degree. Professional programs are the highest earning degrees and doctoral programs are the pinnacle of academic achievement. However, of the 35 percent that go on to complete their master’s, only around 10 percent continue farther. 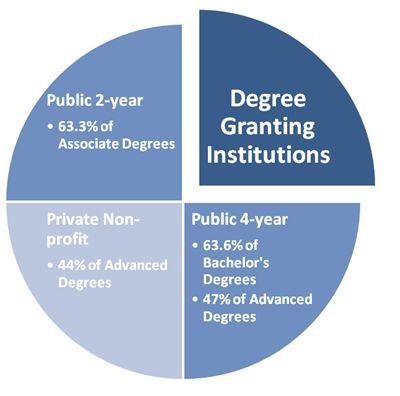 Awarded by institutions of post-secondary education, most degrees come from public universities and colleges. Public two-year institutions award majority of associate’s degrees, while public four-year schools recognize the most bachelor’s awards. Advanced degrees are mutually given out by both public and private institutions of education.

Public four-year schools and private non-profit institutions supply the majority of these advanced programs. The tuition difference between public and private four-year schools is more than double in price. On average students pay around 33,000 dollars for a private education, while public programs generally only cost 16,000.

There are five academic degrees available in a variety of fields. The shortest degree programs, associate’s programs, provide a more beneficial education foundation than certificate programs. However, the overall financial earnings between the two programs only differ by a small percentage.

Bachelor’s degrees are more in-depth programs that are generally designed to provide an overview of a broad field. Working to narrow down a specific discipline within a broad field, master’s degrees are a one year compliment to bachelor programs. After narrowing down and studying a specific discipline, completion of a doctorate program proves that a student is an expert within that discipline.

Professional degrees are generally carried by students who go on to practice medicine. Taking at least eight years to complete, these degrees revolve around an extensive academic work and are meant to prepare students for active practice in their discipline.

This degree is awarded for completing an educational program with either an occupational or academic focus. These degrees are typically designed around two-year programs, although their average completion time is usually more than four years. Nursing and business are two of the most popular Associate degree awards. They are also both occupational degrees, degrees intended to make a person more employable. Academically focused degrees are pursued in the hopes of furthering ones education. Focusing on the liberal arts and humanities, most academic associate’s degree holders transfer into bachelor’s programs.

Employees with holding an associate degree typically earn about a thousand dollars more each month than employees with only a high school diploma. Associate degree careers are often clerical positions, such as a secretary or administrative assistant. However the most popular career for employees with an associate’s degree is acting as a registered nurse. This could have something to do with the fact that majority of Associate Degree holders are female by 60 percent. The highest earning Associate degree, HVAC mechanic, is dominated by the male gender.

These degrees are typically designed around four-year programs, but the average completion time for most students is closer to six years. Bachelor’s degree careers are commonly teacher and manager positions.

Only one-in-four bachelor degree holding students go on to attain their Master’s degree. Then only seven percent of these students pursue a professional degree and an even smaller four percent pursue doctoral degrees. The average completion time for advanced degrees is at least five years. Generally, master’s degree programs are designed to be an extra year of academic work in addition to normal Bachelor’s degree requirements.

Doctoral degrees are the highest possible academic awards students can hope to complete. They are formatted around specific requirements that display a student’s unique fit for a field, such as a dissertation or unique project. Professional degrees are distinguished by having a combination of academic and field work requirements. These programs also require at least six academic years to complete.