Close to 40 percent of all employees with a bachelor’s degree work in a related field of study and more than 30 percent of all associate degree holders do the same. In the advanced degree level almost 50 percent work in a field related to their concentration. The difference between working in a related vs. unrelated occupation can be hundreds or thousands of dollars each month.

The most common fields among all degrees are in education, health, business, and science and engineering. Like certificate fields of study, these have also become gender oriented, distinctly in education fields and science and engineering fields, which retain a noticeable gender gap at every degree level. The other two most popular degree fields, business and health, start out with a strong female percentage at the associate’s level, which slowly drops as academic degree levels increase.

The most popular business occupations at an associate’s level earn an average monthly income of 3,200 dollars. They are generally secretarial, retail and accounting positions. With a bachelor’s of business, employee positions generally stay the same, although monthly earnings jump more than a thousand dollars. At the advanced degree level, accounting and retail positions become accompanied by professions in law. Jumping close to 2,000 dollars, advanced business degrees typically earn around 6,000 dollars.

At the associate level, most education majors earn a monthly average of almost three thousand dollars and go on to become teaching assistants.  With a bachelor’s degree, students find that elementary and middle school education opportunities are available to them as is an average monthly salary increase of almost a thousand dollars. Students with advanced education degrees often find themselves in secondary and post-secondary education, making an average of 1,500 more than they would at the Bachelor’s level.

Associate science and engineering degrees tend to produce computer technicians and a monthly salary over 4,000 dollars. At the bachelor’s level, these degrees open up possibilities in manufacturing and for aspiring computer software engineers. These positions on average earn about 2,000 dollars more per month than positions held at the associate’s level.

Counselors, psychologists, lawyers and veterinarians are employees holding an advanced science and engineering degree. At the advanced level, these professions earn a monthly average that is over a thousand dollars higher than the mean monthly earnings at the associate level.

Driven by popular occupation of registered nurse, associate’s and bachelor’s natural sciences degrees are often carried by women. In fact, at the associate degree level, women held around 90 percent of these awards in 2009. Registered nurses with an associate’s on usually earn a monthly wage around 3,500 dollars. With a bachelor’s degree, this increases by almost a thousand dollars each month and by 4,000 dollars with an advanced degree.

At the bachelor’s degree level, the natural sciences gender gap narrows with women still in the lead by about ten percent. However, at the advanced degree level men take over majority of these degrees, working as physicians, surgeons and pharmacists. 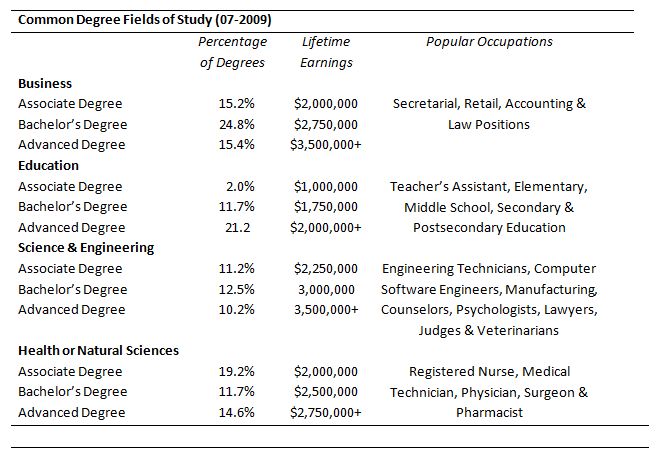