The Rising Cost of Traditional Education

In July 2013, subsidized Federal Direct Student Loan rates are expected to double from 3.4 percent to 6.8 percent. This increase will affect millions of students, adding an extra $1,000 to the amount each student owes. It could discourage prospective students from pursuing a college education while increasing financial pressure on new graduates who are struggling to find jobs. The same issue arose in July 2012, but a bipartisan agreement staved off the increase for a year. 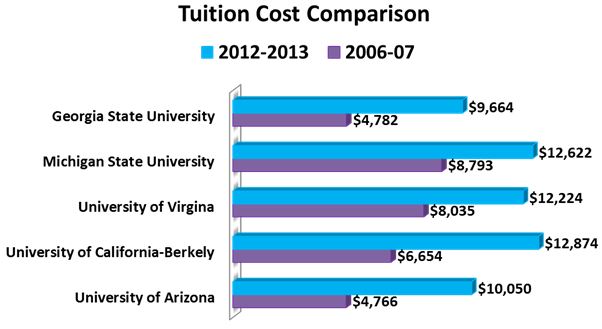 Prospective college students can apply for loans when grants, scholarships, and savings do not cover the full cost of their education. The Federal Direct Student Loan program is the only program approved and funded by the government. Subsidized loans are available to students who establish financial need.

“Direct Loans are low-interest loans for students and parents to help pay for the cost of a student’s education after high school,” according to the Federal Student Aid website. The federal government pays the interest on these loans while students are in school and during periods of approved deferment. Once students graduate and their loans are no longer in deferment, these loans start accruing interest that the student is responsible for paying in addition to the principal balance.

Normally student loan interest rates correspond with market rates, but in 2007, Congress created a policy that froze the 3.4 percent rates. This policy has since created inadvertent issues for borrowers.

“In the past we’ve had these fixed interest rates that were set by Congress and at several points in time it has caused a disruption in student lending,” said Beth Akers, an education economics expert. “The idea that interest rates should be pegged to the market rate makes sense to most people, but it makes it a tough sell politically because we all know that interest rates are going up.”

Several plans have been developed to thwart the rate increase. Democrats, led by Senator Tom Harkin, have a plan that would extend the 3.4 percent rate for another two years. This plan would allow more time for Congress to develop an education bill with a more long-term solution. Rhode Island Senator Jack Reed of the Democratic Party, along with House Republicans and President Obama have a plan that would sync student loan interest rates with Treasury interest rates. Despite these and other efforts, ultimately rates will see an increase.

Members of the government are not alone in their responsibility for this issue, however. “Taxpayers can’t keep on subsidizing higher and higher and higher costs for higher education,” Obama told lawmakers. “Colleges must do their part to keep costs down, and it’s our job to make sure that they do.”

During his State of the Union address, the president encouraged Congress to make affordable quality education from post-secondary institutions a prerequisite of federal student aid eligibility. “Going forward, colleges that don’t do enough to keep costs down, I think, should get less taxpayer support,” said Obama in May 2013. 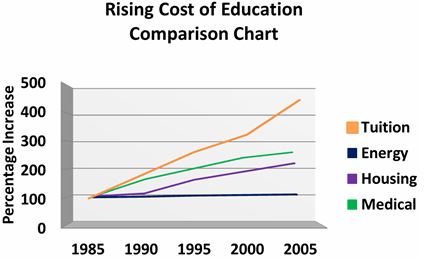 Post-secondary higher education costs increased by more than 400 percent between 1985 and 2005. This percentage far exceeds increases seen in energy, housing, and medical costs, not to mention inflation. Student loan debt continued to increase between 2007 to 2009, making it the only form of consumer debt in the country to grow during the recession. In early 2012, student loan debt exceeded auto and credit card debt. Based on an American Student Assistance report, student loans averaged more than $24,000 and students overall in the United States owed an amount close to $1 trillion in 2012. The tepid job market makes the ability to pay loans back an added struggle. To add insult to injury, student loans debt is one of the few that are nearly impossible to discharge through bankruptcy.

Obama claims that the economy as a whole suffers from the effects of high student loan interest rates. The unwieldy costs of higher education, combined with high student loan rates, deter graduates from spending money in ways that stimulate the economy, such as starting a business or family, getting married, and buying a house.

Earning a degree does not hold the same value it used to. Projected outlooks, by the U.S. Department of Labor, suggest that only 3 jobs, of the top 30 occupations anticipated to be most in-demand, will require a bachelor’s degree or above in 2020.

Even now, according to the Associated Press, about 50 percent of graduates 25 years old and under are either working beneath their education level, or they are unemployed.

With this much financial pressure on students, other less expensive post-secondary options, such as community colleges, online courses and vocational training, are becoming increasingly more appealing. 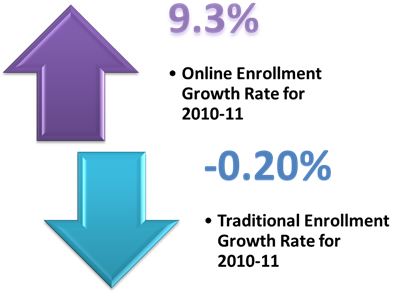 A 10-year study of online education published in January 2013 states that: “online enrollments have increased at rates far in excess of those of overall education.” Whereas traditional post-secondary education enrollments dropped in 2011 for the first time in about 15 years. Thirty two percent of all students are taking at least one online class. Even the lowest recorded growth rate of online enrollment is rather robust at 9.3 percent.

More and more, students are seeking to make informed decisions about higher education. Bearing in mind the financial pressures those decisions entail, such as interest rates and loan debt, they are weighing the higher costs of traditional colleges and universities with alternative and more affordable options prior to applying for schools.