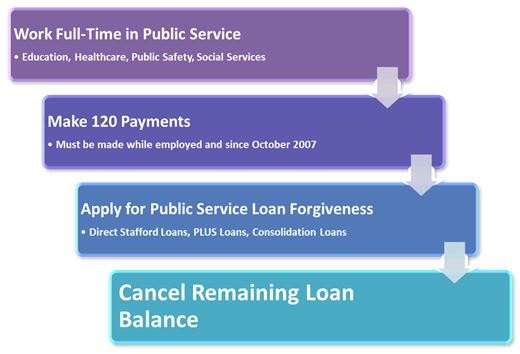 Public service occupations are available in some of the most stable and fastest growing industries nationwide, including education, law services, public safety and public health. Students majoring in education, health, and social sciences are likely to find themselves working in such positions. Many of these jobs are located within federal and state organizations offering better-than-average benefits, such as employee health insurance and vacation time. Finding work within a public service agency can also help students decrease their educational debt.

In 2007, the federal government implemented the Public Service Loan Forgiveness Program as an additional incentive for individuals to work in public service positions. Under this program, full-time public service employees are eligible to have their remaining educational loan balances canceled. Since October 2007, employees must have made at least 120 loan payments while employed in a public service industry to qualify. However, just about any federal loan is eligible for cancellation under the program. Every federal Direct Loan is automatically qualified and other federal loans can be canceled through consolidation, which allows individuals to consolidate different federal loans into one Direct Loan.

In addition to different forgiveness programs, the federal government also subsidizes student interest rates in order to help make education more affordable. There are currently two federal loans offering subsidized interest, the Federal Direct Subsidized Loan and the Federal Perkins Loan. Not only do subsidized loans offer the lowest rates available, they also protect students from the dangers of interest capitalization by eliminating interest accumulated during periods of enrollment and deferment. All educational loans accumulate interest. However, the accumulated interest on subsidized loans is paid for by the federal government.

In July 2011, Congress voted to temporarily lower the interest rate of Direct Subsidized loans to a fixed rate of 3.4 percent. However, this temporary decrease has made potential borrowers nervous about the future. In July 2013, Congress is expected to establish a more permanent rate for subsidized loans. Potentially doubling the current rate to 6.8 percent, the price of stability is high and could add up to a thousand dollars to what future borrowers will owe. Simultaneously,a more permanent rate will allow the federal government to provide future consistency and peace of mind to both federal lenders and borrowers.

The other federally subsidized loan, the Federal Perkins Loan, is designed to help keep both student loan balances and educational expenses low. Federal Perkins Loans are a form of campus-based aid designed as incentives for colleges to keep tuition prices down and ultimately make education more affordable for students. The loan promises colleges with more reasonable tuition rates additional federal funding for other programs, such as the campus-based federal work-study program.

In 2012, President Obama stated in his State of the Union address that if college tuition prices continue to increase, federal funding will decrease. In the same year, he outlined the Federal Perkins Loan Program as a plan to reward colleges with lower tuition. Obama, the federal government and taxpayers agree that the people of the United States cannot afford to keep paying subsidized interest on the ever-increasing costs of education. The president believes it is the government’s responsibility to help make higher education a possibility for everyone. By creating incentives that inspire more competitive tuition rates, he is helping to do just that.

From a different perspective, the federal government can actually be viewed as a cause of such high tuition prices. Institutions would not be able charge such high prices if people did not have the ability to pay them. In a way, by helping to make education more affordable, the federal government has actually contributed to helping make higher education more expensive.

Despite Obama’s beliefs, the easiest way to keep tuition prices down may be to remove the federal government from the process. An absence of federal loans, especially subsidized loans, would drive the out-of-pocket price for education up and increase the use of private loans with higher interest. In order to maintain enrollment levels and funding, colleges and universities would be forced to drop student tuition rates. Either way, the federal government would be helping to force post-secondary institutions into making higher education more affordable.

Increasing costs of education have not damaged student enrollment, which continues to rise. The college-aged population of 2013 is the largest and most educated generation in the history of the United States. Known as millennials, these 20-and-30-year-olds are known for their technological advances and innovation. With the rise of a more educated generation interested in ideas and technology, it is easier than ever to stay connected with others in the world and in one’s generation.

In 2013, the millennial advocacy group Generation Opportunity asked people everywhere for ideas on how to help keep the cost of tuition down. The Facebook post received more than 1,000 responses and suggestions from over 1.5 million members, demonstrating this generation’s ability and idealistic desire to help make college more affordable for everyone.