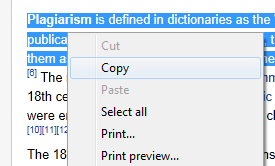 College kids have sticky fingers when it comes to lifting words from the Web.  Far too many believe authoring an academic paper involves one essential step: hitting “Ctrl C” on the keyboard.

In fact, simply hitting “Ctrl C” and swiping gobs of content from the net is one of the most common types of plagiarism according to a recent Turnitin report entitled The Plagiarism Spectrum.

The Rise of Digital Media – Encouraging Cheating and Plagiarism?

With the rise of the Web as “the source” of reference material, plagiarism has become easier to commit – and increasingly difficult to define – contend the report’s authors.  Newsrooms across the nation are mashing-up articles in a way that would send English teachers of bygone eras into a tizzy. Entries in Wikipedia, a precious favorite of students seeking an easy reference, boast not a single citable author.  Who cares who writes all that boring reference stuff anyway?

Today, mashing and re-mixing are acceptable journalistic methods that even national news sites embrace in the race to create cheaper “content.” Mixing and mashing, along with the creation of content swills that are opinion based, rather than fact based, has created a digital media culture where the very notion of a primary source has been kicked to the wayside.  Cheating and plagiarism styles have kept up with the times.

Turninit labels several of their most popular plagiarism styles with terms that echo some of the leading digital news practices of our day: the mash-up, the aggregator, and the re-tweet.   Turnitin’s top 10 list, re-posted below, reveals, I think, as much about the sorry state of digital media as it does the higher education ethics of our times.

Note: Cheating and plagiarism preferences are listed below in order of their severity as judged by instructors themselves. Definitions are given verbatim from the Turnitin report.

Is cheating and plagiarism really that big of a concern?  According to the Educational Testing Center (ETS), as reported in a 1999 National Ad Council campaign, about 20% of college students admitted to cheating and plagiarism in their high school years during the 1940’s. By 1999, 75 to 98 percent of college students admitted the same academic dishonesty in high school.

Read in reverse, these ugly statistics mean that between 2% to 25% of college students did NOT cheat in preparation for college a decade ago.  These statistics were reported in 1999 — just as the Internet was poised to permeate mass culture, making late-night cheating as easy as a quick copy & paste.

If you’re an instructor who thinks cheating is not a problem in your classroom, you may be behind the times. It makes no difference whether you teach in a classroom or online, because in the end all students undertake their research online.   Google AdWords boasts 590 monthly searches on the phrase “cheating in college.”  By comparison 2,900 searches are undertaken each month on the exact phrase “how to cheat on a test.”

It’s not hard to decipher what your students are searching for on the Web.  The lines between acceptable behavior and cheating and plagiarism have become increasingly blurred with the ease of using the internet for research. Even properly citing of legitimate sources is still plagiarizing if there isn’t enough original content to balance it out.

Use this great top 10 list to teach your students what plagiarism really means in all its shades.   Just tell them: “It’s like Latin for ‘stealing,’ kids.”