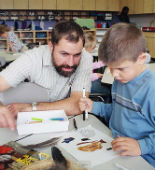 The most common type of special ed certification available online is the mild-moderate endorsement. This type of certification is for teachers who intend to work with grades K-6 or grades 7-12 and want or need a general type of certification. It sounds like you would be aiming for a K-6 or K-12 certification.
The focus of a mild-moderate special education endorsement is on teaching children who present mild to moderate learning challenges inside the school system. Such challenges may be physical, emotional or cognitive.
Special education is a non-homogeneous field that embraces a wide spectrum of the population. Online degree programs that focus on teacher training for working with the talented and gifted, as well as programs that prepare teachers to instruct the visually impaired, all fall under the broad umbrella of “special education.” It is possible to earn online certification in autism spectrum disorder, your career goal.

You do not say if you have a bachelor’s degree or a teaching degree. I am going to assume you do not have a teaching bachelor’s degree or teacher certification now. Our researchers do have profiles and reviews on more than 550 accredited online education and teaching degree programs. You can review them all to explore this field in greater detail.
There are only a few 100 percent online bachelor’s in special education. State-specific licensing requirements and the need to complete local teaching internships as part of degree program create hurdles that make it hard for colleges to overcome using a virtual learning environment.
Western Governor’s University, founded in your home state of Utah, operates the largest online bachelor’s in special education program. WGU admits students nationwide. This program, which is National Council for Accreditation of Teacher Education (NCATE) approved for teacher licensure, provides a 100 percent online degree and helps students find and complete a 12- to 20-week demonstration teaching requirement at a local school.
Students seeking certification will need to complete both the online courses and a local supervised teaching practicum to meet state licensure standards. WGU assists online students with both.

All states require special education teachers who teach in the public schools to be licensed. Licensing typically requires at least a bachelor’s degree and completion of an approved teacher training program in special education. In addition, teachers must pass a background check and pass a national teaching exam post-degree. Many states these days require a master’s degree for work as a special educator.
Licensure requirements vary by state. For traditional licensing, all states require a bachelor’s degree and the completion of an approved teacher preparation program.
In addition to earning a broad level endorsement such as K-12 mild-moderate, special education teachers can earn online endorsements for working with specific types of special ed populations. Online endorsements are available in specialities such assistive technology, supervision and administration, autism, bilingual teaching and working with the talented and gifted.

Many states now require a master’s in special education to teach in the public schools. Special education is one of the most popular and easiest endorsements to earn entirely online. Get Educated profiles 35+ master’s in special education online, all accredited by the NACTE and designed to meet licensing standards. (View the most affordable degrees.)
A special education master’s will require at least one year of course work—including a specialization—beyond a bachelor’s degree. A prospective teacher may have to pass a professional assessment test as well. Be sure and check with your state teacher licensing board before committing to a degree or certificate for professional use in the public school system. Online degree programs have staff teaching certification advisers and mentors who can help you understand if their programs meet your state credentialing requirements.
In some cases it may be possible to earn an online graduate certificate in special education en route to a master’s degree. A certificate may also allow special education teachers to focus their online studies in a single specialty area, such as working with the talented and gifted or the use of adaptive technology in the classroom.

What is a Special Education Teacher?